Share on Facebook
Wow, it’s been a while! We have been so busy here lately wrapping things up before winter and getting ready for the baby. Chance recently butchered 48 cornish cross chickens to fill the freezer for winter, and we had a wonderful baby shower! There is still a lot on the to do list to get accomplished before the baby comes in 15 days, so I’m sort of hunkering down and trying to get everything together! But let’s talk the homestead…
They’re dirty, smelly, will eat anything, but so cute. No, I’m not talking about my husband and son! I’m talking about our homestead pigs! I have to admit, I had not planned on having pigs here. I figured we would stick to smaller animals here on our two acres like the chickens, ducks, and rabbits. The pigs were sort of a spur of the moment addition to the homestead. Let me tell you the story… 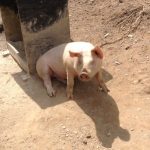 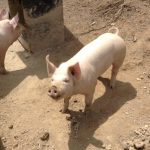 Our hillside is covered in brush and mess, and we were trying to figure out what we could do to cut the brush down and make the hillside better and more usable. The only option we could really think of was renting a brush hog for a day and doing what we could with that. Then Chance had a (crazy) idea: pigs. I thought he was insane. Pigs seemed like a much bigger project to take on, and I wasn’t sure if it was a good idea. He kept going on about the pigs and what a good idea it was, and I started to give in a little and explore the idea.
http://a%20href=
We figured up that the cost of renting the brush hog for just one day was going to be about $500. That seemed like quite a bit to me for one day. We then calculated the start up cost for four pigs we had found locally. Purchasing the pigs and initial set up for them was around or just a little over $500. The one thing that won me over? We can’t eat a brush hog. So, we ended up with four pigs. We purchased four American Yorkshire females, and our lives have surely changed since then! 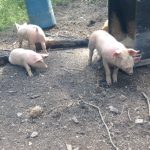 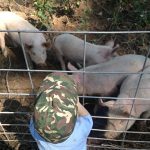 If you have ever considered getting your own pigs or are just curious as to what having pigs is like, I’ll lay out some pros and cons for you.
Pros

Overall, I have really enjoyed the pigs. They are adorable and have so much character. It’s been amazing to watch them grow from six week old babies to pushing 200 pounds. They have also grown more accustomed to us, and we are able to pet them- even Henry! He absolutely loves his pigs. 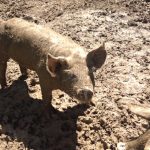 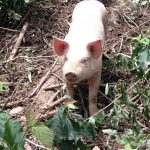 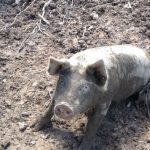 This December, we will butcher one for our family, sell one, and keep two. We hope to breed the two we keep in the spring. As crazy as it sounds, I can’t wait to have little piglets running around! I think Henry will love having little pigs to help take care of, and it will be amazing to see new life begin on the homestead.
Speaking of new life on the homestead, we are anxiously awaiting the arrival of our daughter. We have a lot going on in these next two weeks before she comes, so my next post may be a bit delayed, but I will be back with an update as soon as possible!
Previous Post: « Granola
Next Post: We’re Back! »

Also find us on